For the last few holidays, I have posted this short story on various blogs, message boards, and Facebook. The story is interesting as well as sobering. This is about a very familiar song and a very unknown musician.

The song I refer to is Christmas Eve/Sarajevo 12/24. If you listen to holiday music, this song has become one of the most oft-played tunes on holiday radio. It was released and performed by the Trans-Siberian Orchestra and is included on their popular CD entitled ‘Christmas Eve & Other Stories’.

The back-story to the song is explained by Paul O’Neill, one of the co-founders of the Trans-Siberian Orchestra in an interview he had given to ChristianityToday.com

“We heard about this cello player born in Sarajevo many years ago who left when he was fairly young to go on to become a well-respected musician, playing with various symphonies throughout Europe. Many decades later, he returned to Sarajevo as an elderly man—at the height of the Bosnian War, only to find his city in complete ruins.”

“I think what most broke this man’s heart was that the destruction was not done by some outside invader or natural disaster—it was done by his own people. At that time, Serbs were shelling Sarajevo every night. Rather than head for the bomb shelters like his family and neighbors, this man went to the town square, climbed onto a pile of rubble that had once been the fountain, took out his cello, and played Mozart and Beethoven as the city was bombed.”

“He came every night and began playing Christmas Carols from that same spot. It was just such a powerful image—a white-haired man silhouetted against the cannon fire, playing timeless melodies to both sides of the conflict amid the rubble and devastation of the city he loves. Some time later, a reporter traced him down to ask why he did this insanely stupid thing. The old man said that it was his way of proving that despite all evidence to the contrary, the spirit of humanity was still alive in that place.”

“The song basically wrapped itself around him. We used some of the oldest Christmas melodies we could find, like “God Rest Ye Merry Gentlemen” and “Carol of the Bells” part of the medley (which is from Ukraine, near that region). The orchestra represents one side, the rock band the other, and single cello represents that single individual, that spark of hope.” 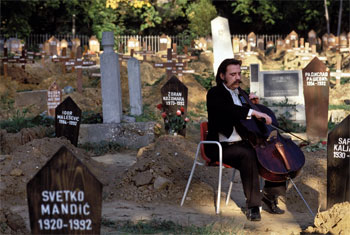 The cellist that the story refers to is Vedran Smailović. However, unlike the “white-haired man” referred to in the story, Smailović was in his mid-thirties at the time of the Siege of Sarajevo.

Smailović, known as the “Cellist of Sarajevo”, is a musician from Bosnia and Herzegovina, and a former cellist in the Sarajevo String Quartet.

He played in the Sarajevo Opera, the Sarajevo Philharmonic Orchestra, The Symphony Orchestra RTV Sarajevo, and the National Theatre of Sarajevo.

He regularly playing his cello in ruined buildings during the siege of Sarajevo, most notably performing Albinoni’s Adagio in G Minor.

Smailović also played at funerals during the siege, even though funerals were often targeted by snipers. He escaped the city in late 1993 and has since been involved in numerous music projects as a performer, composer and conductor.